The blueberries had already begun to ripen before I left San Francisco. They grow in abundance, covering the tundra for miles around our cabin.

Gary and Ella lead the way to the best blueberry patches

Gary and other locals insist that what I consider abundant is in fact a relatively weak showing. But I come from the land of Whole Foods, home of $6 half-pints, so it looks like a lot to me.

Wild blueberries are even more nutritious than their domestic counterparts; they have more antioxidants and a more concentrated, tangy flavor.  Canned, these berries will be an important supplement to our winter diet—fresh fruits and vegetables will be in short supply.

Picking berries is fun for an afternoon, and somewhat less so after that. Still, if it gets tedious, it’s tedious in some of the most dramatically beautiful landscape I’ve ever seen, so I look around a bit too often and find I’m picking at half the rate Gary is.

Ella entertaining herself at full speed while we pick blueberries

Ella gets bored, too, but does her best to stay occupied. Maybe she thinks the task at hand is to strip the tundra of all of these pesky berries. It seems that way when she plops down next to me and starts stripping the fullest branches of their fruit just before I can get to them. When she tires of eating blueberries, Ella runs in circles as fast as her legs can carry her, finishing at a dead run straight for me and knocking me over with kisses.

The berries grow low to the ground, so when I find a patch I like I usually settle in by sitting, which seems easier on my back. But even the most innocent-looking patch of caribou lichen hides fallen blueberries, and what is blue on the bush becomes distinctly purple on the seat of my pants. Oddly, it is green on my tongue. If you are told you are eating wild Alaskan blueberries, and your tongue doesn’t turn green, they aren’t the real deal. 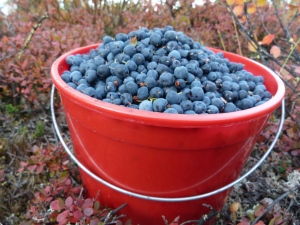 It took a few hours to fill this bucket!

Heading home, we carry our buckets of blueberries high over the sunset-red dwarf birch brush to avoid getting extra leaves in the buckets. Wild blueberries should be cleaned of sticks and leaves as soon as possible after picking before they get soft. Gary showed me how they almost clean themselves if you roll them a cup at a time down the length of a cake pan. The berries roll, but leaves and sticks don’t. Berries that have been sitting too long in the fridge or those that have softened on the bush after an overnight freeze or two are more of a challenge. They don’t roll as well, and the minuscule leaves get stuck in the juice.

In the end we put up 13 quarts of blueberries in Mason jars, which Gary assures me is nothing to brag about. But this was my first time canning, so I’m bragging anyway. We canned them with a bit of sugar, ready to be turned into pies or smoothies or just about anything. But for the most part, we are likely to freeze the juicy contents of a jar in small batches, ready to eat as the perfect dessert around a warm winter fire.

Lowbush cranberry—lingonberry—season has come and gone. They ripen just as the blueberries are starting to soften on the bush. Gemlike amidst the soft green caribou lichen curling under spruce trees, it seems almost a shame to pick them. Almost. We put up nearly as many jars of cranberries as blueberries, saving some out to make chutney to go with our caribou and moose roasts.

The last blueberries are still out there, weeks after we declared the season over. Frozen hard these wintery mornings on bushes barren of leaves, they might be almost easy to pick now. Every morning I promise myself I’ll go out and pick just one more bucketful.

We drove to Anchorage in an unsuccessful attempt to pick up our snowmachine. On the Parks Highway past the Talkeetna spur road, between No Dogmushers Road and the turnout to the Gigglewood Lakeside Inn, a bald eagle soared just above us. The iconic bald eagle images we see every day are so much smaller than life.

Driving back yesterday, we had some dramatic views toward Denali.