Every day we see the tracks of neighboring wildlife, but they appear in sharpest relief when snow has obscured our own footprints. A snowshoe hare seems to live in our yard, perhaps attracting the fox who visits occasionally. Moose browse the riverbanks, and caribou sometimes pass not far from the wind turbine. Smaller tracks suggest martens, voles and birds – Canadian jays, magpies, chickadees, ravens, spruce grouse and ptarmigan. The birds sometimes leave wing marks in the snow, perfect snow angels. 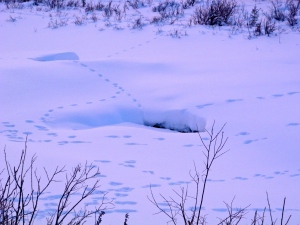 The single track belongs to the fox; a snowshoe hare has visited, too. The fox may have been hunting birds, which seek out open water.

We don’t see the animals themselves as often as we’d like, but on Saturday as we made our way home on the snowmachine leg of our trip back from Anchorage we saw seven moose. New snow fell in our absence, and as snow deepens moose increasingly use the road.

The day after Christmas as I was filling my water buckets I looked up from the watering hole to see Ella standing stock still, attention focused, paw pointing. I turned to see a large cow moose browsing the opposite riverbank.

I didn’t have my camera with me, so I told Ella to stay with me as I crawled up out of the watering hole’s ice room on my belly, not rising until I was well  under the cover of the woods. I ran to the cabin and came back quietly, Ella on my heels. I went out onto the river; the moose saw us, but didn’t startle. Ella looked at me and then toward the cabin as I shot photos; she seemed to be offering to go get Gary. She could see I was wasting a perfectly good shot, using a camera instead of a rifle.

When Gary cut down the trees blocking the sun from our solar panels and the wind from our turbine (see “Men in Trees,” October 2011), we filled our big red sled several times with the debris. The resulting pile had a purpose: it formed the base of our solstice bonfire. Gary added branches from the dead spruce we recently harvested for firewood, and the mound grew. As it turned out, we were away at the solstice—my cousin Glenn’s wedding day—and snow had covered our woodpile. So Gary set about trimming dead branches from trees in our yard this week, and once that was done it was time for the bonfire, before any more snow could fall.

The bonfire stood over six feet tall, not counting a foot or two completely covered by ground snow. Gary lit the fire in three or four places. As it began to take hold, sparks rose high, red lights swirling against black sky. After some time the sparks diminished, and soft gold flames rose from iris blue heat.

Ella chews a stick while Gary watches the bonfire

Ella brought a stick with her, and sat chewing it nervously as she witnessed the destruction of so many potentially fine sticks. Gary and I watched the fire, lost in thought. Ella interrupted us frequently, at times to woof at an unseen animal outside the perimeter of light, but mostly she was talking, wanting to be petted or entertained, or maybe complaining about the pointless waste of sticks. Ella doesn’t often talk, but when she does she’s usually complaining, and it sounds like Charlie Brown’s teacher in the “Peanuts” specials.

“Wuh?” she asked, pointing with her nose for permission to redeem some sticks that had fallen out of the fire’s reach.

A wall of orange-hot branches remained. Gary pulled green boughs from under the snow, working until all the branches were in the fire’s path. I wondered aloud how far our fire might be seen. 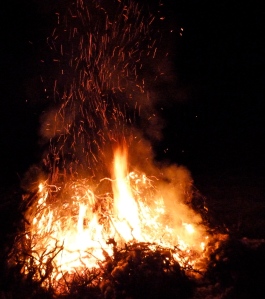 “When man first orbited the earth, the Bushmen of Australia lit bonfires, and the astronauts saw the Bush ablaze with them,” Gary told me.

We watched awhile longer, and when the blaze was not much bigger than a good campfire we turned home. 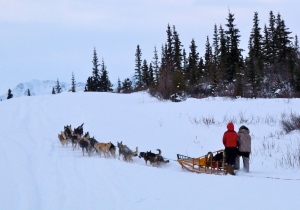 Snow comes early and stays late on our little highway, making it ideal for dog mushers training their teams for the Iditarod, Yukon Quest, or other long-distance races.

The snow is just now barely deep enough for a sled’s snow brake to take hold, and on some parts of the road perhaps not quite deep enough. Mushers have creative ways to solve for this.
One has thirty-six dogs pulling his truck, which is large enough to serve as a kennel for the team. We’re guessing he uses his brakes downhill to slow, so the truck doesn’t overrun the dogs, and could provide an assist uphill. 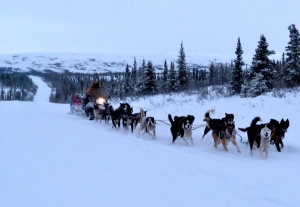 A musher travels on snowmobile with sled behind. He looks like he's wearing a bear suit!

With the snow getting deeper now, it’s not uncommon to see a team pulling both a snowmachine and a sled. The musher can ride the sled so long as the snow is sufficient, switching to the snowmachine if needed.

Gary’s lumber mill is elegantly simple – he was able to show me how to mill a few pieces of lumber myself in just a few minutes. The hard part? Moving ten-foot logs twenty inches in diameter into place. I found it hard to learn how to use a peavey with Gary holding up his (very heavy) end while I tried to get my hook into the log! 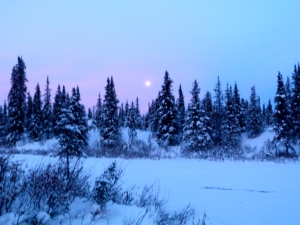 If I had to get up early for sunrise, I never would have gotten this shot. This was taken at 8:45 a.m. after the time change.

indeep-alaska.com by Barbara Bailey is licensed under a Creative Commons Attribution-NonCommercial-NoDerivs 3.0 Unported License.