I come from a place where the seasons are constrained in an extraordinarily tight and moderate range. San Francisco rarely sees temperatures above 90 or below 40. Seasonal change is comparatively subtle. Autumn leaves drop in the heat of Indian Summer; cherry blossoms appear when the year is new, and reliable old oak trees come into focus on the straw-brown hillsides well before summer fog rolls into the City.

Here I expected a monotony of winter broken mainly by changes in temperature, snowfall and wind. And the freeze-up of the river, I knew that was coming. But I naively imagined ice would spread from the banks inward, simply a thickening layer over the water. 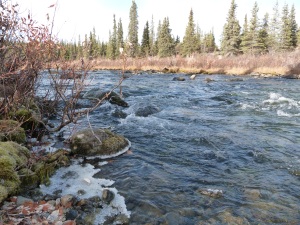 Early ice on the river

At first that’s what seemed to be happening. One day the stepping stones I had used to get to the clear flowing water in summer had a thin shell of ice. A scenic frost formed around them, and soon ice scalloped the length of the shoreline and began to edge the mid-stream boulders. The rush of water swept young ice into its stream, and I filled my buckets with icewater.

Ladling slush from the overflow

I was surprised by what happened next. Unseen ice forming along the frozen riverbed narrowed the creek’s channels, pushing water up and over the surface crust. Slushy water flowed onto the banks and through the willow brush. I learned to wade cautiously until I found myself in ladle-worthy depths.

Once temperatures dropped close to zero, slush quickly turned to ice. Snowfall covered the slightest crusts, creating the appearance of a river largely frozen over, breached only by a few pools. Under the snow was a patchwork of ice, made thick or thin by forces of air, sun, wind, water and snow. A deep eddy was close to shore; the ice leading to it was solid, so I had an easy filling station for my water buckets. Briefly. A cold snap brought temperatures as low as 38 below zero. High winds made a good excuse not to go out one day and that was enough; the pool had closed. 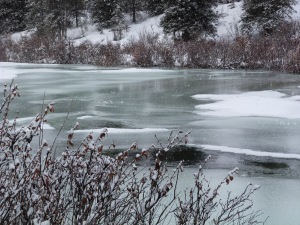 Surface ice forming on the creek

I moved on to the next opening, but the hole quickly became the very definition of a slippery slope, a two-foot perimeter of slick and sloping ice. When I didn’t come back promptly from my water errand one day, Gary found me with the ice chisel, back at my original spot hacking away fruitlessly. Taking over, he chopped through six inches of solid ice. To defend the breach, we laid spruce boughs over it and topped them with an insulating blanket of snow.

We hiked upstream on the riverbed, turning home at sunset

We left to spend Thanksgiving with Gary’s sister and her family near Anchorage. It stayed cold, so we delayed our return and didn’t go back to the creek for a week. Everything had changed. The creek looked as though it had been hit by an earthquake. Long fissures appeared through thick ice along the shore. Its sources frozen, the river rapidly lost volume, leaving nothing to support the surface. Here and there ice had crashed to a new, lower surface; in other spots it had cracked but held, for the moment. Our water hole was intact—if a hole can be intact—perfectly protected by the snow-covered boughs. But the water level had dropped a good two feet; a new layer of ice had formed below. The water was well out of reach.

Ella peers down toward the new watering hole

Our second pool, too, was gone. Heavy ice covering an area about half the size of our kitchen had collapsed down about three feet, revealing a ceiling about eight inches thick. A smaller shelf appears above the floor, making it seem like a room.

Standing quietly, we could hear water. Gary stepped down onto the floor, chopping at it with axe and ice chisel. The ice was about two feet thick. He worked up a sweat, making a hole large enough to dip the bucket in. We brought bigger boughs and shoveled more snow to protect it.

The ice is nearly as thick as the bucket is tall

I love my new watering hole. I can sit on the floor and peer under the river’s surface. Icicles hang from the bottom of the surface ice, and the ice version of stalagmites rise from the floor. It is decorated with crystals and carpeted with snow. I can look right through the sheered edge of the surface ice; transparent blue, it is utterly gorgeous. I hope the ice and water will stay awhile, unaltered. But I know that when I come back to find my ice room changed, something beautiful will take its place.

The ice is transparent where it sheered off; I can see under the river's surface of ice

It may not be convenient, but it will be beautiful.