Return of the Sun

On Tuesday, January 24th, I used my red pen to record one of the year’s highlights: for the first time in months, sunlight streamed through the kitchen window.

Winter solstice is a tease. It took four days after the solstice to gain one minute of daylight. But now, more than a month later, each day is about six minutes longer than its predecessor. That may not seem like much but it adds up quickly, and the shifting rhythm of the day keeps me off balance. I find myself ready to settle in for the evening with an hour of daylight to spare, or I forget to start dinner until dark, not soon enough when the freezer’s operating at thirty below. Our shortest days were four hours and thirty-two minutes long, and today we have seven hours and eighteen minutes of daylight.

Sun on the riverbed at 3:37 p.m. on January 23rd, the day before it finally streamed through our window

We’d been watching, wondering when the sun’s arc would rise over our hill high enough to hit the window. We’d seen sun hit the trees and riverbed, but we’d had no direct sun since November and no wind for weeks.  That left us dependent on our gas generator to charge the large (128-lb.) batteries we draw from when we use electricity. But when the batteries wouldn’t hold a charge, Gary discovered one was dead. The end result — which is all I fully understand — is that we can use as much electricity as we want for the six hours it takes the generator to run out of gas (it holds a gallon and a half), but without the generator we’re limited to the radio and maybe a quick check of email or brief use of an electric light. That is, unless we get sun on the solar panels or a good sustained wind. We’re comfortable working in the dimmer light of our propane lamps and staying offline for a couple of days at a time, but eventually our tools, computers and cameras need charging. The generator is noisy and keeps us glued to our computers as we work to take full advantage of it, so we’d rather not use it. With the return of the sun, Gary focused on putting up the additional solar panels he’d bought last fall. On the 24th we began work in earnest.

“Do you want to stay on the ground or work up on the platform?” Gary asked as we prepared to hoist the set of eight panels onto the twelve-foot high platform.

We got the panels up! Gary is fixing them to the platform before connecting them.

“I can guide them, but I can’t lift them,” I answered, assuming that would mean staying on the ground.

“OK, climb up then,” Gary replied.

Oh, well. He pushed as he climbed, I guided and supported the panels with a rope, and Ella looked on, emitting worried whimpers. 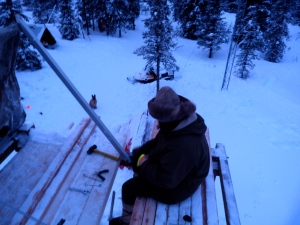 Tools freeze to the platform, hands stiffen in the extreme cold. It was about 38 below here.

Gary’s work was slowed by the weather, which stayed between twenty below and forty-five below the days he was outside. When I went up the ladder to help him mark a metal brace for cutting, the felt pen tip iced up. Wire becomes inflexible and brittle, tools freeze to the platform, and metal is so cold to the touch that it burns. Gary was in and out of the cabin every few minutes to warm up or cut a piece of metal or wiring, or to do small tasks that in any other weather he would have done on the platform as he worked, like finding the right bolt from his bucket of nuts, bolts and screws. We didn’t know we’d see temperatures rise nearly eighty degrees this week, so he pressed on. He finished the wiring around midnight a week ago Friday, and the next day we woke to clear skies and eight new (used) solar panels feeding the batteries.

Months ago we heard a rumor in town that the military, or possibly a mining company, was planning to have our road plowed this winter. We weren’t sure what this would mean to us. If it were actually plowed, we might have trouble getting to town by snowmachine, riding on the less stable shoulder. We have Gary’s diesel truck here, but it doesn’t like the cold.

Gary took Ella up the road Tuesday morning last week, and when he returned he simply said “Go check out the road.”

The grader followed the heavy equipment out, leaving the road smooth again.

The machine had come and gone, leaving a hard-packed surface so smooth I could almost skate on it in my mukluks. A grader normally pushes, whereas this machine was like a Sno-Cat dragging behind, but for lack of a better term, I’ll call it a grader. It was preparing the road for the military or mining equipment.

A few days later, once the smooth road had set up, we saw the grader heading east, followed by huge semis with tracks replacing the tires, which made a mess of the grader’s work. The crew has been back and forth a few times since then, even carving a graded path to our snow shelter outside the campground as it made a U-turn. The other day the equipment haulers carried a load west, toward town, with the grader (mercifully) following. Today they headed east, apparently headed back for another load.

Ella checks out the smooth road.

2 thoughts on “Return of the Sun and Making the Grade”