For as long as I can remember, I’ve showered to wake up, warm up and wind down as well as wash up; a hot shower is refuge and reward. Gary knew this, and perhaps he couldn’t be sure I’d ever feel at home without a shower. He fretted about making what had been more summer camp than cabin into a home in when he arrived here in June, just two-and-a-half months before I did; soon he wrote me he was building an addition to the cabin to house a shower and closet. I was pleased, of course, but felt a twinge; I’d never asked for a shower, but I knew the price, particularly in time, was dear. 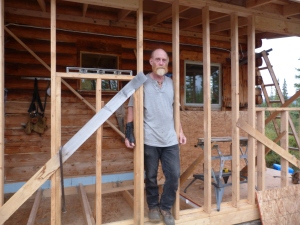 Gary’s letters took me through his struggle to make a home for us from the day he returned to the cabin after two years’ absence, overwhelmed by decades of stuff and the memories it contained. Beyond the truckload of belongings he’d brought from San Francisco, Gary had enough in storage to fill a boxcar, and he actually did. The Alaska Railroad unhooked the boxcar from the train, he spent three days loading it, and when it arrived he spent another three days unloading it, filling his truck and horse trailer each time, making the thirty-mile drive down the gravel road to the cabin, unloading, and going back the next day. There was more to it than that, including a broken nose, but it was still only a small part of Gary’s challenge: to clean out the place and make a comfortable space for the two of us. 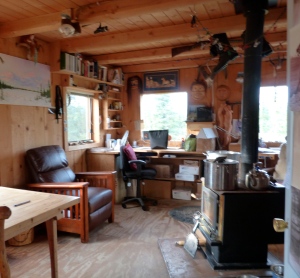 Gary got the place looking great by the time I arrived. This is the cabin's main room.

Summer days are long here, but summer itself is short. Gary had to prioritize work requiring unfrozen ground, temperate weather, abundant daylight, or any combination of these. Planting a vegetable garden, digging the foundation for the addition and for the shower’s underground drainage tank, building a small woodshed for firewood that otherwise sat on the porch, these things Gary had to do early. Making an outhouse seat – it was a simple squatter before – was a small job, but one he thought best to complete before I arrived. Building drawers, shelves and a cabinet in the kitchen gave him something to do on the frequent rainy days.

Gary had to bring in the shower stall and attach the drain before putting up exterior walls, but once that was done the shower room project gave way to more urgent matters. By then I’d arrived, and we had several multi-day trips to winterize my car, find warm clothes and skis for me, and buy a snowmachine and sled, solar panels, generators, wind turbines and provisions for winter. The cabin had never been used in winter, so Gary removed the blue metal roof, panel by panel, along with a number of squirrels’ nests, positioned new insulating foam board, and then reinstated the roof. He built yet another woodshed to accommodate the load of green birch we’d bought, and began splitting wood so I could stack it there to dry. We set up the wind tower; Gary installed the turbine and together we dug four-foot post holes for the platform we needed for the additional solar panels and managed to fix the heavy sixteen-foot six-by-six timbers in the holes with no major injuries. By this time in the season the sun was too low in the sky to reach the platform, so Gary finished building it but set aside the task of installing the panels. 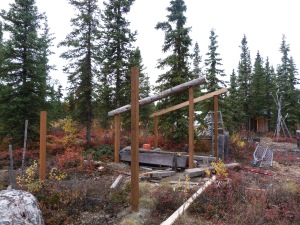 The large woodshed going up.

Separated as it is from the main room with its hot wood-burning stove, the new addition is cold in winter. We close it off in extreme weather to retain heat where we need it most, but when temperatures dip much below zero we can’t imagine showering there. So priorities shifted to logging deadwood to refill firewood stores, installing the solar panels, keeping trails open and packed with the snowmachine, skiing and generally getting out to enjoy the season. With the upturn in temperatures recently Gary refocused on the new addition; he installed insulation, paneled the interior walls, built the closet and shelves, configured a workspace just big enough for his carving bench, and put finishing touches on the shower stall. He was going to paint the shower area, but previously-frozen latex paint never returns to its liquid state, come to find out. Last fall we bought a pesticide sprayer that holds three gallons, and after a certain amount of futzing it was ready to function as the shower’s mechanism. 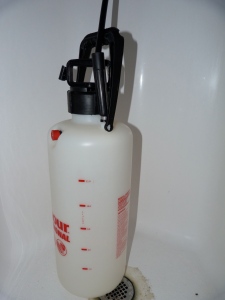 This is the pesticide sprayer that serves as the mechanism for our new shower.

Meanwhile, we’d been making do with nightly sponge baths and the old-fashioned Saturday night bath in the galvanized steel tub. (See www.indeep-alaska.com/2011/09/27/complex-solutions-for-a-simple-world-part-ii.) Well, Saturday night for me, right before our Saturday night movie; Sunday for Gary. Gary loves his bath, reading or working Sudoku while he soaks.

I love how I feel after my bath; the experience itself is hardly relaxing. First I mix the water from one of the large stock pots on the stove with cold water or hotter water until I’ve got it just right. I kneel on a towel next to the tub and stick my head over it while Gary ladles the water onto my hair. (This sounds easy enough, but involves some rarely-used muscles to hold the position.) Once my hair is wet, Gary pauses while I lather up, then gives me a rinse. The once-weekly schedule means my hair is really dirty, so it’s rinse-lather-repeat. When we’ve decided my hair is clean and shampoo-free, I climb into the sudsy water and bathe. The process is much like any bath, except there’s no room to maneuver in the cramped space; how to get the soap to the harder-to-reach body parts is a puzzlement. When I’m done I really should rinse off the soapy water, but it’s not worth the trouble; I feel clean, and that’s enough. Of course there’s still the matter of the tubful of dirty water; we can empty it right away or trip over it until we do. 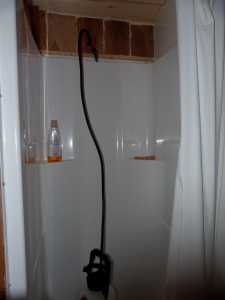 Shower, sweet shower. The room is small, so I couldn't get any farther back to take the photo!

But now we have a shower! We just fill the pesticide sprayer’s reservoir with water, pressurize it by pumping the handle maybe 150 times, carry the sprayer into the shower and, voila!  The hose is long enough to hook the nozzle up so it sprays down like a standard shower head, or it can be used like a flexible European shower handle. The nozzle works much like a miniature gas pump; it can be set for continual spraying or not.

I can shower as long as I want with about two gallons, and there’s always at least that much water warming on the stove. The water drains to the underground tank, so I can just relax when I’m done. It’s not the same as the kind of showers I’ve known and loved before — nothing’s the same here. But I guess that’s the point. 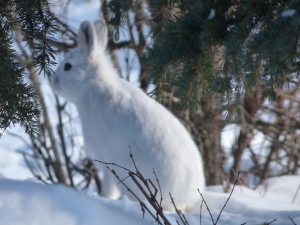 Happy Leap Year! Ella spotted the elusive snowshoe hare for me. The hare's not posing; he thinks I can't see him!