We have no bananas today. No apples either, though we do have blueberries and cranberries we canned last summer and some canned pineapple. We still have frozen mixed vegetables and spinach, as well as canned tomatoes, beets and olives, dried onions and potatoes. For some reason we have lots of corn, frozen, canned and dried. We were sad to see the last of the peanut butter go; we try to make enough buckwheat pancakes on Sundays to have leftovers for peanut butter and jelly sandwiches. I had a large can of peanuts, but just as I was getting good at making peanut brittle I opened it to find only one solitary goober, sitting forlornly in a bed of salt. 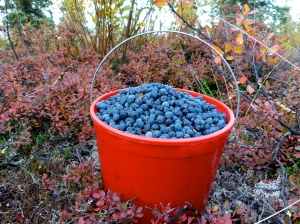 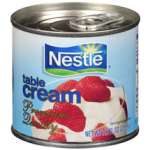 Canned cream: not for the weak of heart.

I haven’t had a glass of wine for weeks. I would miss it more except that we’re limited to boxed wines; they freeze without breaking and we can burn most of the packaging. Some boxed wine is OK; some tastes so bad it has to be really cold to be drinkable. Fortunately, that’s not a problem here.

Last week we ran out of butter, so I’ve been using rendered goose fat, kept frozen in a pint jar on the porch since Christmas. The other night I made licorice chews with goose fat and canned cream. (They tasted better than they sound.) Am I the only one who never heard of canned cream before?  It’s caramel colored — I’m being polite here — with the texture of watery yogurt, and comes in 7.4-ounce cans. If I need cream so badly that I’m buying it in a can, don’t you think they could give me a full cup so I don’t have to adjust every recipe? I’m guessing canned cream is only sold in places where even ultra-pasteurized cream won’t last between trips to the grocery store. We haven’t been shopping since December 23rd, so that would be us. I’ve tried freezing cream, but it never does return to its liquid state.

The bananas lasted five weeks, so we’ve been without since the end of January. When we first brought the bananas home, Gary cut off the tops and we stored them in a cool, dark place. After a few weeks the skin was a disgusting mix of brown, black and yellow, but the fruit was not at all overripe. We ate half a banana each on our daily oatmeal, together with half an apple, raisins and walnuts. After the bananas ran out we used banana chips while they lasted.  I did find some dried apples to simmer with our morning oatmeal and the last of the raisins, and had the presence of mind to order some walnuts from amazon.com, which we picked up when we went to the Post Office in mid-February. 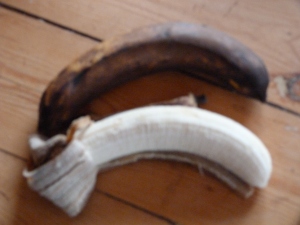 Our last two bananas at the end of January. They are five weeks old and look it, but the fruit is fine.

Thanks to some friends, we also picked up eggs, yogurt and apples at the Post Office. If Brenda and Harold happen to be going to Anchorage and there’s a chance we might be coming to town, they offer to get us anything we need by way of food, hardware or other supplies. It wouldn’t be decent to give them my entire list, so I ask only for the most dearly missed items, and eggs if Brenda has some to spare from her chickens. But since Brenda and Harold weren’t around the morning we came in, they dropped the groceries off with the Postmaster. Jed handed them over with a smile as he piled the counter high with nearly two months of mail and packages. The apples brightened our breakfast for a couple of weeks, and we used the yogurt as a starter to make more yogurt. I was particularly thrilled to get eggs, since I was down to my last one, frozen in its shell. I’ve been cooking with previously-frozen eggs, but the yolk remains oddly firm even at room temperature. 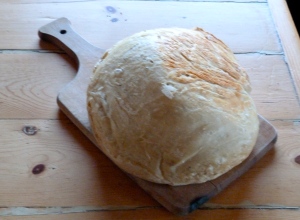 I’ve stopped baking bread on the wood stove now that temperatures are higher. It requires such a hot stove, it turns the cabin into a sauna!

Despite all this, we eat well. Blueberries more than make up for whatever else is missing from our oatmeal. Canned pineapple is ambrosia to us, and it takes all our best instincts not to fight over the juice. I’ve learned to like canned beets, well enough anyway. I made quite a decent minestrone with a caribou neck bone, canned tomatoes, the last of the frozen green beans, macaroni, millet, kidney beans, frozen corn, garlic paste, dried onions and chunks of Parmesan rind. I’ve frozen lasagna made with Italian sausage, frozen spinach and reconstituted mushrooms; I don’t know how it would stand up in San Francisco, but it’s delicious here when we come home tired from logging or skiing and find it warming on the wood stove. With Brenda’s eggs I make a wonderful milk eggnog with snow; it’s like liquid ice cream. And I’ve already bragged about my newly acquired woodstove bread-baking skills. I’m using grains I never cooked with at home: dried corn in the caribou chili, barley risotto, millet, and amaranth in soups and stews. Oats, groats, kamut, and kasha sit in glass canisters on the countertop, in full view so I’ll remember to try them when I’m in an experimental mood. Cornbread baked atop the wood stove with goose fat and frozen corn is as good as it gets; if we top it with honey we hardly miss the butter. A Cornish game hen is perfect for two, with a curried stir-fry of rice and frozen mixed vegetables. And I’ve saved one lonely can of Alaskan salmon to go with my last bag of frozen spinach for a favorite pasta dish. Now, if only I had a really good wine to go with that… 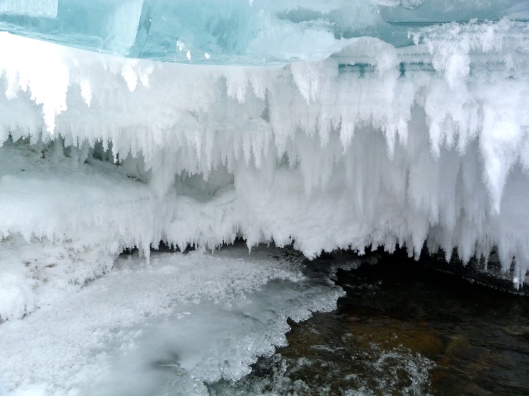 6 thoughts on “Yes, We Have No Bananas”