I once read that happiness in life is most often found among those who continually take on challenges, challenges small enough to make success achievable but not so small as to ensure it. Researchers found that happy people stretch themselves, maybe just a little, but often. Meeting the tests successfully more often than not, their sense of achievement, self-determination and self-assurance grows, and this seems to lead to happiness.

Work of any definition can be fertile ground for pursuing happiness through challenge. I was lucky to have mentors in my career who fed me a steady diet of challenges I could (with their support) manage successfully often enough to get beyond my failings and not infrequent failures. My challenges now are, arguably, much smaller; they are surer of success, and in success or failure negligible in their impact on others. In a recent post (www.indeep-alaska.com/2012/01/30/division-of-labor-2) I mentioned a few: learning to build a fire, drive a snowmachine, stack wood, and can berries.

My second attempt at woodstove yeast bread, a little oddly shaped as I had to flip it over to brown the top.

I’ve been learning to bake atop our wood stove. With varying degrees of success I’ve made pumpkin and cranberry-orange quickbreads, chocolate chip cookies, brownies, sweet potato biscuits and lasagna. I finally conquered my long-standing fear of baking with yeast by attempting French bread. The first loaf was heavy and dense, successful mainly as a butter-delivery system and because it had been ever so long since we’d had bread. But the second loaf and all that followed were really good, excellent even. The big surprise was how easy it is, yet it took so long for me to try. (It’s so easy, in fact, I was making a loaf a day in hopes of freezing a supply, but had to stop. We were eating most of it hot off the stove, a daily feast of refined grain slathered in butter.)

Homeward bound, looking upriver as we return from logging

This week I’ve been learning to tie knots, and was pleased with myself all out of proportion when I used a bowline knot to secure my snowshoes (I wasn’t wearing them!) to the sled I was hauling behind the snowmachine. That was another first: as Gary led the way downriver to the woods to do some logging, I followed in his old snowmachine, smaller and less stable than our new one. I’d never driven it before — never driven on river ice either, for that matter — and Gary had warned me the machine tips easily. So I declined to try when he suggested it last week. When he mentioned it again yesterday, I felt ready. Snowmachines have seats; at least they look like seats and feel like seats, but God forbid you actually sit down. I had to stand or put one knee on the seat in order to shift my weight quickly enough to stay upright through uneven snowdrifts and curves. On the return trip I carried a sled full of skinny logs we’ll use as poles, which Gary had carefully tied down. Good thing he did: I was so focused on the path ahead, the whole load could have slipped off and I wouldn’t have noticed. It didn’t, of course, and we all got home without incident. It’s a victory of modest measure, but satisfying still. 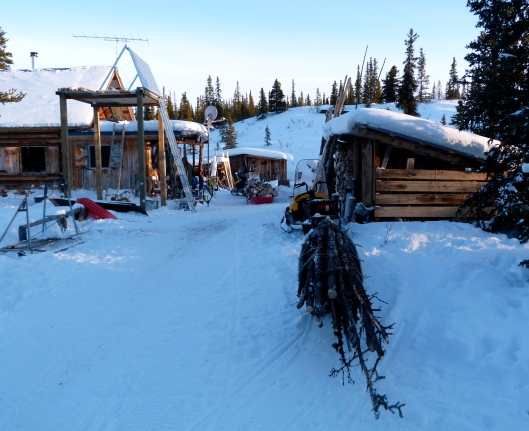 Home from logging with both snowmachines

In my past life, when free time was in short supply and home life unhappy, I found it difficult to extend myself. Baking a loaf of bread seemed too much to attempt. I did take up running, a fair challenge. But that was nearly twenty years ago, and it’s no coincidence I wasn’t working at the time.

I’m proud of friends and family whose work touches lives, directly or indirectly, and in so doing contributes importantly to the larger world. It isn’t only by comparison that my victories here are small, their impact isolated. But these little victories change me. One at a time they broaden my understanding of the possible, bring me joy and renewal, and ready me for challenges — great and small — that lie ahead.

Spruce grouse in a spruce tree in our yard

NOTE: I’ve added a glossary of Alaskan terms to the website as a separate page at www.indeep-alaska.com/glossary-of-alaskan-terms/. Enjoy!