With sunrise coming later and later – it was at 10:38 this morning – I usually wake up once or twice before dawn. Our bed sits high, level with a window, affording an easy view of the night sky and the spruce-covered slope up to our hill. I’ve learned that if I wake to see Orion directly facing me, the time, now in late December, is about 3 a.m. A few days ago I woke to find a bright moon in Orion’s place; it was 7:30, well before first light. 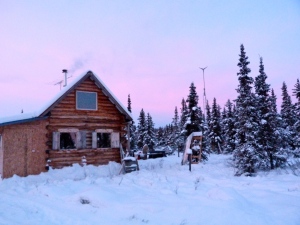 When I was a kid, my sister Janet once gave me a Snoopy pillow that read, “I’m allergic to morning.” I’ve always loved my sleep. In recent years, though, I learned to rise very early, just before 4 a.m., to make time for my coffee and my thoughts. Then I would head off to the gym or out for a run before turning the rest of my day over to the needs of others at work and at home. In Alaska, with the best of both worlds, I can sleep in and still wake up before the crack of dawn.

I like to be the first one up. Though we keep a chamber pot in the bedroom, I can’t bring myself to use it, so I use a bladder-activated alarm clock. Wedged as I am between the window and Gary, I slide off the foot of the bed, careful to find the floor first, then the opening to the loft’s ladder, which lies just inches away.

Ella greets me as I reach the landing, making it hard to disembark. She used to stay curled up if I got up early or if the fire had gone cold. Now that she’s taken to climbing up on the loveseat after we’ve gone to bed, she tries to sneak down before we can catch her. I stoke the fire, slip on the imitation Ugg boots I got at Costco, and zip up my giant parka. Then Ella and I run outside together, racing back before I have time to wish I’d put on some clothes. Though it’s in the 20’s now, we had a cold snap with several days starting at 38 below. Still, even at those temperatures a quick foray doesn’t require more than a jacket and slipper-boots. 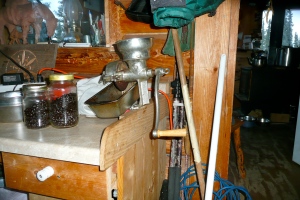 The coffee grinder, with jars of coffee beans at the ready and a loaf pan to catch the ground coffee

Back in the cabin, I grind coffee in an old grain grinder, enjoying the sound and smell and the crunching resistance as I turn the handle twenty-five times for the first of our two pots. Ella and I might sit together on the loveseat as I start my first cup, but she jumps off to greet Gary, who emerges very shortly. Between pots, I make the trip to the raised garden bed in back to dump the spent grounds. Oatmeal and raisins simmer on the stove while Gary and I make our plans for the day. This is our routine every day except Sundays, which we celebrate with buckwheat pancakes, blueberries, and maple syrup. Usually we finish breakfast just after sunrise these days, so we are suddenly alive with activity, keen to capture the daylight. 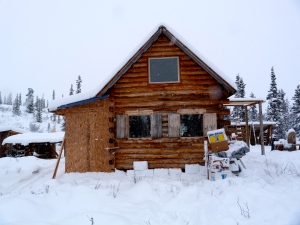 Snow banking is a seasonal chore. A few weeks ago we set about banking the house on all sides with snow for insulation. To cover the crawl space under the cabin, Gary filled apple boxes with snow and left them overnight to set into blocks. But the warmth from inside the house and outside from the sun causes the snow to pull away from the walls, so every few days I mend it with new snow, trying to see how high I can get it to stick.

Despite our best efforts, when it is very cold rime grows on the inside of the windows, and an increasingly solid frost outlines the front door frame. The kitchen drain stopped draining, so until we can figure out whether it’s just frozen or if the underground tank is full, dishwater has to be tossed outside. I know it won’t be long before I slip with the bucket of greasy, oatmeal-y water on my way to the compost pile.

Gary covered as many windows as he could with the foam board he had on hand, and we open the boards every morning to catch any light that may come our way. The rooftop solar panels catch little light as the sun makes its lazy arch lower and lower in the sky, so if there’s no wind we have to keep Internet usage to a minimum, which partly explains the recent gap in my postings.

I once sent Gary a winter solstice card, thinking what a relief it must be to know that the days would begin to grow longer. He answered that he always felt a bit sad knowing the daylight would start eating away the dark. For the first time, I think I understand. The short days give a happy sense of urgency, whether to go out in the snow for pleasure or just to use the daylight to get things done. I love how the pink shades of sunrise and sunset set the boundaries, soft boundaries now as they very nearly join up. And the nights, to my great surprise, are almost light. The snow reflects every ray of moonlight or starlight, and only at the new moon is there any real darkness. We often ski on the frozen river, coming home by the light of the moon. And once we’re home for the night, I love knowing that the darkness will bring time for reading, talking and planning, cooking, eating and sleeping, uninterrupted by the guilt of burning daylight.