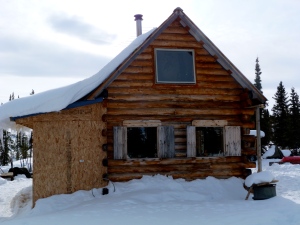 Icicles akimbo off the east side of the cabin.

A constant drip from the roof, the occasional “thwump!” as a section of snow slides off, chickadee-dee-dee, these are the sounds of spring.  Snow disappeared from the porch, then melted away from the grate in front of the door; once again we can stomp snow from boots on our way in. Yesterday a porch step re-emerged, a now-unexpected drop-off. Our well-insulated, formerly icicle-free cabin is dripping icicles as sun melts the still-thick snow from the east-facing roof. The steeper west-facing roof is blue again; I watched the last section of snow crash to the ground a week ago. Gary leads an expedition to cut firewood, logs and poles or break and reinforce ski trails most days with a new sense of urgency, while we can still run the snowmachine and its sleds on the river and through the woods. 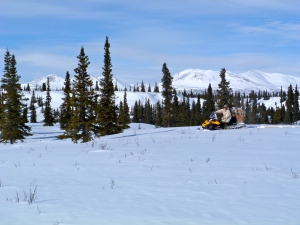 Canadian jays overwintered here, but gave off begging for food suddenly in the last days of March. Chickadees, with us again since late January, were joined first by one grosbeak, then others, in early March. Week before last I heard a woodpecker in our yard; and while we were out in the woods a few days ago, we saw the first bald eagle of the season high overhead. The snowshoe hare or hares are in frequent evidence, and Ella has chased her first squirrels of the season. She will soon be providing copious amounts of nesting materials for the local feathered population: she started shedding a few days ago. 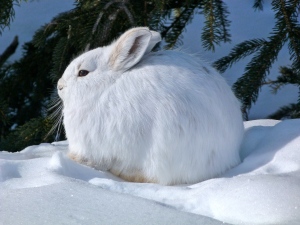 Sunglasses are a permanent fixture around my neck or on my head – I didn’t need them this much in California! I’m more likely to forget my hat, gloves and even my jacket, cheechako that I am, than my sunglasses; the brightness is astounding, even on a cloudy day. The ice around my water hole has become mostly transparent and even less stable; on warmer days I think about going to the river in nothing but my boots, to avoid drenching my clothes when the inevitable happens. (See http://www.indeep-alaska.com/2012/03/07/taking-a-leap.) 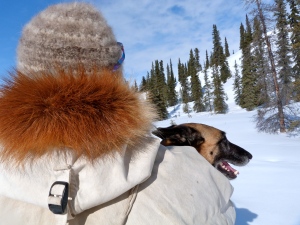 Ella gets a ride on the snowmachine.

For months I drafted these blog posts in a notebook to conserve energy, but now I can type away knowing we’ll have plenty of solar even on a cloudy day. Days are balmy, up to 42°, a temperature that seemed far colder last fall than it does now. I had started sitting on the porch to work at the computer, but moved back indoors after Ella hurt her two right paws in short succession, as no amount of pain seems to keep her from jumping and playing when she has the chance. Her injuries put a crimp in our plans to go camping, but Gary assures me we’ll have enough snow to carry our gear in sleds for weeks to come.

After the snow-camping season ends, a pack animal may stand in for the sled. We’re thinking of getting a goat. I used to drink copious amounts of milk, and miss it terribly. Goats are social animals, so if we get a milker she will need a companion. We saw an experienced pack-goat on craigslist the other day; though we couldn’t call about it, not having a phone, when we go out next we’ll see if a milking doe and a pack goat can’t be squeezed into my SUV.  Yaks might be even better for milk and packing, but I don’t think I can get even one yak into my car. 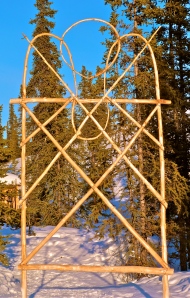 Gary is working on this peeled spruce trellis he calls "Rising Sun."

Spring has given us other ideas, too. With the season for garden sales coming up, Gary had a thought to design and build bentwood trellises as he thins young spruce from his land. As for me, when we went to Fairbanks I bought supplies to make a mould and deckle for papermaking, something I’ve never even thought about trying before.

It’s too warm to keep the fire hot all day, and that’s started us thinking about cooking outdoors. I miss baking (and all three of us miss my bread), so we’re going to set up to bake over an outdoor fire. And since I dragged a solar cooker all the way from San Francisco, where I never had enough sun to use it, Gary pulled it out of the shed today, and I’ll start learning to cook in it on the next sunny day.

Springtime in San Francisco meant flowering trees and greening hills. Here we have sunshine and snow. Everywhere it’s time for the new, time for renewal. Get out and enjoy. 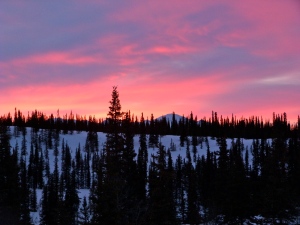 Spring is a lovely time for after-dinner walks. This is what 9:00 p.m. looks like.